How can a small curtain cover a window three to four times its own size? With a motor and a robot brain, that's how! 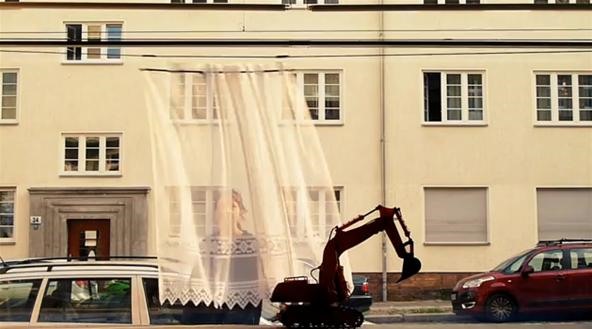 
"My workshop is located in an old storefront with a big window facing towards the street. In an attempt to create more privacy inside, I've decided to install a small but smart curtain in that window. The curtain is smaller than the window, but an additional surveillance camera and an old laptop provide it with intelligence: The computer sees the pedestrians and locates them. With a motor attached, it positions the curtain exactly where the pedestrians are.

The whole setup works really well. But in the end, it doesn't protect my privacy at all. It seems that the existence of my little curtain is leading itself ad absurdum, simply by doing its job very well. My moving curtain attracts the looks of people which usually would never care about my window. It is even the star of the street, now! My curtain is just engaged. And because of that, it fails."

It is cool, but i cant help thinking that a window blind would have been easier and cheaper.