In the wealthy oil man's world of Arabian camel racing, the tradition of using child jockeys has been replaced with the use of small robo-jockeys in recent years. But after finally ridding the game of the mistreatment of children, the sport is now under scrutiny again. The Dubai police have discovered a new feature illegally added to the torturous, whip-endowed robots: hidden stun guns. 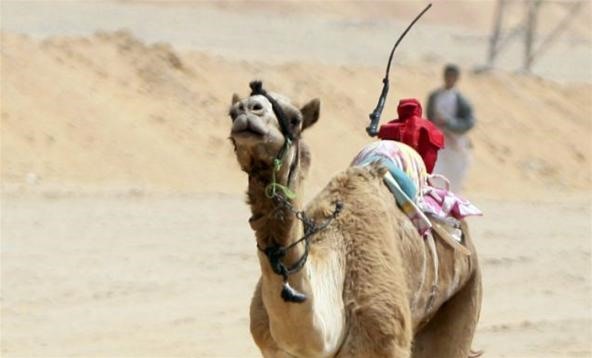 The Telegraph reports that an uncovered gang were selling stun gun kits for "up to £5,000, across the region" which could be "fitted inside the robot jockeys... [and then]... administered by remote control to encourage the camel to run faster." Brigadier General Khaleel Ibrahim al-Mansouri, head of Dubai CID, arrested the men and issued the following statement: "It is inhumane to use such machines in camel races. It is also against animal protection laws and against our traditions."

Below, a crazy video from YouTube of the little slave driver bots steering the poor camels around a 6 kilometer track at 50 kph.