PETA wouldn't consider James Auger and Jimmy Loizeau's ingenious flypaper clock very eco-friendly, but I might beg to differ. The clock doesn't require any electricity or batteries. Instead it captures flies and converts the bodies of the dead insects into energy. Eight dead flies makes for roughly twelve days of power. Not bad.

One tiny step toward saving the planet, while eliminating pesky flies at the same time. Two birds with one stone. Cycle-of-life. And, as you'll see in the video below, it can be used for more ambitious applications in the field of robotics.

...until I saw the mice-eating coffee table! 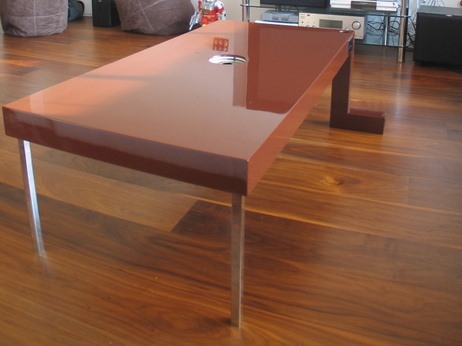 "A mechanized iris is built into the top of a coffee table. This is attached to an infra red motion sensor. Crumbs and food debris left on the table attract mice who gain access to the tabletop via a hole built into one over size leg. Their motion activates the iris and the mouse falls into the microbial fuel cell housed under the table. This generates the energy to power the iris motor, sensor and a LED graphic display on the front of the table–top."

Flies are one thing, but guillotining live mice for energy is stomach-turning. Yes, mice are even more of a nuisance than flies, and we already kill them with mouse traps, but robots powered by small animals starts to enter a very freaky territory. I'd have to agree with this comment from Auger and Loizeau's blog:

"With the exponential growth of robotic technology and AI, it seems tempting fate to give robots a taste of organic matter as an energy source. This is something not even postulated by the Terminator movies, that the robots would eat us for energy. If you're going to make eating robots at least make them vegetarian only."

Creeped out? Pontificate below.

When are they going to start eating humans?

cool,but i bet the table smells like dead rats

why would you WANT mice crawling around on your table?

It has begun. The robots have started to eat living flesh. Can anyone say robot zombie apocalypse?

Machine's powered by animals? Sounds like the work of Dr. Robotnik! Time to call sonic.

Honestly, the concept of that stuff being (only) inside seems slightly limited. Why not expand it to include other machinery - a heated chicken coop powered by several fly-catcher motors, for instance.