What feature would we most like to see in the robots of tomorrow? Why, the ability to interact with human beings without crushing them to death, of course. Happily, thanks to a new pressure-sensitive synthetic skin technology, the dream is within reach: 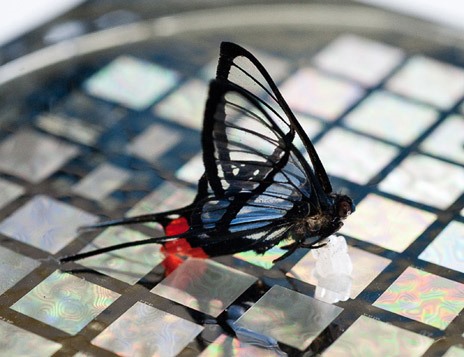 "Today's advanced robots and prosthetic arms can grab an egg or a plastic cup without crushing it, thanks to tactile sensors on the fingertips. But you wouldn't say they're sensitive enough to pat a baby to sleep. For that you'd need to cover the robot arm with pressure-sensitive synthetic skin that could sense a featherlight touch.

Two research groups, one at the University of California, Berkeley, and the other at Stanford, have independently made advances toward such a sensitive system. Their prototypes are as good as human skin at quickly detecting small amounts of pressure: Within 100 milliseconds, they can feel pressures ranging from 15 kilopascals to less than 1 kPa. (The gentlest touch you can feel is 1 kPa.)" 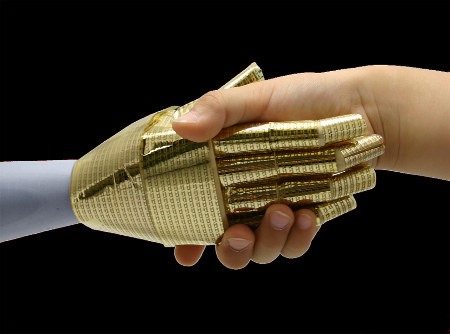 "The two prototypes are built on the same idea: They contain a pressure-sensitive rubber layer whose electrical properties change in response to pressure, and they have an underlying matrix of transistors that detect this change.

The synthetic skins still don't emulate one important feature of human skin: spatial resolution. On some parts of the body, human skin is able to differentiate between pinpricks 2 mm apart, says Cheol Park, who is working on nanotube-infused polymers for artificial skin at the National Institute of Aerospace. Each pixel in the Stanford and Berkeley prototypes is, respectively, 8 mm and about 3.5 mm to a side. Park hasn't succeeded in achieving a small enough resolution using carbon-nanotube-infused polymers and is now working with boron nitride nanotubes, which he says show more promise."