This holiday season, two lucky consumers will have the opportunity to purchase a robot twin, specially made by Japanese robotics firm Kokoro. 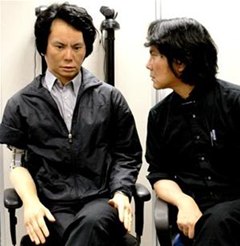 "Department store operator Sogo & Seibu has announced plans to sell two humanoid robots custom-built to look like the people who purchase them.

In addition to providing the robot with the owner's face, body, hair, eyes and eyelashes, Kokoro will model the robot's facial expressions and upper body movements after the buyer. The robot's speech will be based on recordings of the owner's voice.

Orders will be accepted from January 1 to 3 at any of Japan's 28 Sogo, Seibu, or Robinson's department stores. Only two robot twins are available, but given the hefty price tag of 20.1 million yen ($223,000) each, the stores will likely be hard-pressed to find any takers."